A selection of traffic cameras in Frankfurt am Main, Germany. On the first screen select "Verkehrsinformationen" from the top menu. You will then get a map showing the camera locations (you may have to adjust the options) and a menu on the right with the names. Clicking "Bild anzeigen" shows the view in a new window. It updates automatically every minute. Several of the cameras show the tramway. Hauptbahnhof/Mannheimer Straße gives the best view.

This is Freiburg, Germany. We get a moving picture from the Volksbank cam at Bertoldsbrunnen (a central 'hub' of the tram network) which slowly pans back and forth. Trams go in various directions.

From high up on the Mundsburgtower in Hamburg, Germany, we get a view down onto Mundsburg Station of Hamburger Hochbahn A.G. Over the 100 year old viaduct run trains of U-Bahn route U2. The image is updated once per minute, but you will need to use refresh on your browser to get it.

This view is at Limmerstraße in Hannover, Germany, near the Am Küchengarten tram stop. Trams on route 10 pass by on their way to the Ahlem terminus in the west of the city. The image updates only hourly.

These traffic cameras are in Hannover, Germany. They are on the roads that skirt the city so for the large part have no trams, but routes 4 and 5 pass camera 9 at Pferdeturm. Clicking on the number on the map opens a pop up window showing the scene, with "reload" and "close" options below. The camera pans so does not always show the same view and at times we have found this camera to be off-line. 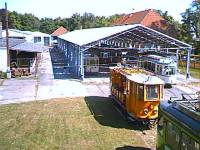 This is the Hannover Tramway Museum at Sehnde-Wehmingen, Germany. The museum trams operate on Sundays in the summer. There are three views, which update automatically every 15 seconds.

Here is Ettlinger Tor Platz in Karlsruhe, Germany, where a number of tram routes pass through running north-south in the view. The location is about 500m due south of the well known Marktplatz. It updates every 5 minutes with an archive of previous views which can be shown as a slide show. 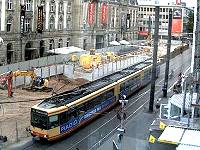 This camera shows the Europaplatz in Karlsruhe, Germany. It updates every 5 minutes with an archive of previous views which can be shown as a slide show. A Karlsruhe tram routes 2, 4 and 6 run here.

This camera shows Kaiserstrasse at the junction of Lammstrasse in Karlsruhe, Germany. It updates every 5 minutes with an archive of previous views which can be shown as a slide show. A number of Karlsruhe tram routes running east-west pass this point.

This camera shows the Mühlburger Tor tram stop in Karlsruhe, Germany. It updates every 5 minutes with an archive of previous views which can be shown as a slide show. A number of Karlsruhe tram routes pass this point.

This page gives traffic cameras in Karlsruhe, Germany. Click on the cams on the map or the list to the right. Most have trams (our view is at Kronenplatz). Images update every 30 seconds but you need to use refresh on your browser.