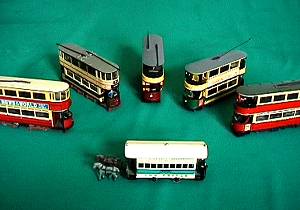 Many displays are made up from a wide range of static model trams. There are over one hundred British and overseas trams in 00 scale, over sixty continental ones in H0 (half of which can be run on Johannesfeld), and a small range of London buses and trolleybuses. Seen here (right) is a selection of London trams in 4mm scale.

There are over sixty models in the Hong Kong collection in scales ranging from 1:250 up to 0 gauge. In this picture (left) are Post-war cars modified from the Tramalan / Majestic white metal kits in 4mm scale.

In 1/16th scale there are the following trams available for display:- 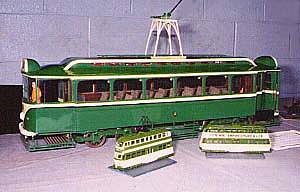 These single-deck bogie cars were always known as "Pantograph" cars as they were so fitted when first built in 1928. The pantographs were removed and normal trolley poles were fitted in 1933. One of these cars survived and was renovated by Blackpool Corporation for the Electric Tramway Centenary in 1985. It is interesting to note that in recent years Blackpool has returned to the use of pantographs on most of its trams.


This is an example of the standard British open top double deck tramcar of the type that ran in most tram towns. Shown in its original condition, this type was built in 1901 for East Ham Tramways by the Electric Railway & Tramway Carriage Works, using a Brill 21E truck and Dick Kerr equipment. Most of this type of tram were given top covers at a later date, but number 2 remained in the open top form for use on the service which ran to Stratford, operated jointly with West Ham, where there were sharp curves and a steep road camber. (Photo see Newbridge display) 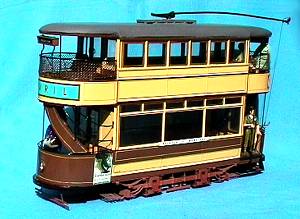 This is a car of 1901, originally open top, to which a domed roof from Milnes Voss & Co. was added in 1908, giving this open balcony form. The model is of the tram as it was in 1933 and has passed into the ownership of London Transport, who have painted out the East Ham name and crest and have added the "G" suffix to the fleet number. This car is very similar to the West Ham tram in the London's Transport Museum Collection except that the LT one has a flat roof.


This Glasgow Corporation Tramways works car was used as a tools van. It is based on an early Glasgow type which may have begun life as an electrified horse car, and was cut down from double deck to this condition in 1913. It was fairly common to use old double deck trams with the upper deck removed and the sides modified to form different types of works car such as tools vans, stores vans, snow brooms or ploughs, parcels vans etc.


This model is of the prototype of the class of tramcars known as the Kilmarnock bogies. Introduced in 1927-28 they were similar to the contemporary London cars, this one having Hurst Nelson LCC type bogies. Note that the tram in its original condition had a trolley pole. A little later this and all other Glasgow cars were filled with bow collectors. Glasgow cars of this era were painted in a different colour for each route, this car being on the "red" route. (Photo see Newbridge display) 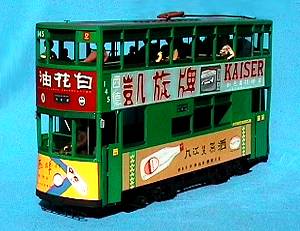 This car is much like the ones still running on Hong Kong Island today. This class of tram was built in the 1950s based on a similar design to cars built for Hong Kong in the 30s, but much simplified for local construction. The 1930 cars themselves were a direct descendent of the original fleet of 1904, hence the crude and dated, but very British look. The car used a Peckham P35 truck and originally was first class on the upper deck and second on the lower but were later one man operated, rear entrance - front exit, as shown, being in the 1970s condition. 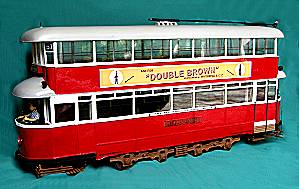 Built in 1927 for the Metropolitan Electric Tramways as their 319 by the London General Omnibus Company at their Chiswick Works, this experimental tram was known as "Poppy". A few months later, after comparison trials with MET 318, "Bluebell", it was transferred to the London United Tramways, becoming their 350. In 1933 it passed to London Transport and was renumbered 2317. It was withdrawn from service and scrapped in 1935. This tram has often been likened in style to the NS bus, a batch of which were under construction at Chiswick Works at the same time. Despite its short life, Poppy had 5 liveries (3 with LUT), two sets of trucks, two sets of brakes and three different lighting configurations. As shown the model represents Poppy as it would have looked in 1928. 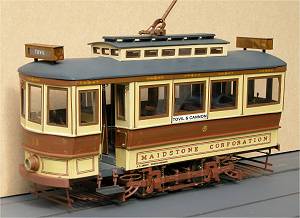 Built in the 1909, by the United Electric Car Company of Preston, this demi-car had a 3ft 6in gauge Mountain and Gibson 21EM 5ft 6in wheelbase truck, with two Westinghouse compound wound motors to Raworth's specification. John Smith Raworth (1846-1917) was the engineer responsible for the development of demi-cars. The purpose was to provide a tram that would use minimal electricity and so could be operated at low cost on light traffic routes. The Raworth design was for a small lightweight single-deck car with a front entrance/exit. It used regenerative braking and would be capable of operation by one person, having a safety passenger control barrier interlocked to the controls.


Built for the Metropolitan Electric Tramways in 1930-31 by the Union Construction Company of Feltham, Middlesex, these cars were always known as the "Felthams". A number were also built for the London United Tramways, a fellow member of the Underground Group of companies. With their modern looks, upholstered seats, and air brakes, they were a revolution when they first entered service. In 1952, when the London tramways closed, these cars were sold to Leeds Tramways and gave further service until 1959. There is one in the London's Transport Museum Collection. 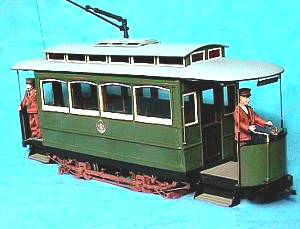 This tram was one of the nine luxury cars of the Monaco Tramway. They were 8.40m long and 2.12m wide, and carried 36 passengers, 24 seated in two classes on "two and one" seats and with 6 more standing on each platform. They were mounted on metre gauge 2.13m wheelbase Brill 21E 4-wheel trucks having two GE53 42-horsepower motors and B16 controllers with rheostatic emergency brakes. The tramway was opened in 1898 and used stud contact current collection, but in 1903 cars were fitted with trolley poles. In 1908 the ownership was passed to the Compagnie des Tramways de Nice et du Littoral who operated the Monaco tramway until 1931.


This is a model of a 4-wheel water car of the type built for the West Ham Corporation Tramways by Mountain & Gibson in 1905. It had a 2000 gallon water tank. These vehicles were used in the early days to wash grime, rubbish, and muck from the tram tracks and surrounding road. At this time most other road traffic was horse drawn with the obvious by-product problem. Many tram systems had one or two such cars. 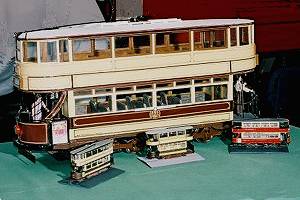 Built in the late 1920s, this style of double deck, enclosed balcony, bogie car was typical of the London Trams of that era. It had a Brush body, Hurst Nelson Trucks, and BTH equipment. The car was fitted so that it could run either on the overhead current collection system or using the London County Council Tramways' conduit system. East Ham, Croydon, Walthamstow, and the LCC all had somewhat similar trams to this and were not unlike the E/1 class car numbered 1025 in the London's Transport Museum Collection. 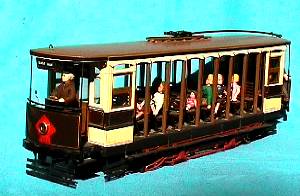 This is a crossbench 4-wheel tram which was never actually built. The model was constructed from an original West Ham Corporation Tramways drawing dated 1920. It is thought to have been designed for summer use on the routes to Wanstead Flats and Epping Forest, which were at the time very popular for Sunday outings, and where it was hoped that loading and unloading could be speeded up. Due to the post war lack of motors and control equipment the idea was dropped. However, many similar cars did run at this time in seaside towns.